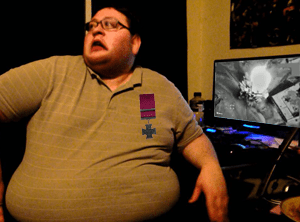 Although untraumatised, pilot will need years of occupational therapy.

A drone pilot, battling away in a reasonably comfortable lounge, has become the first remote combatant to achieve the Victoria Cross.

Despite a searing repetitive strain injury and being down to his last 2 bags of pretzels, John Stilgo continued to pour missiles into a deadly Afghanistan orphanage.

“I wasn’t concerned at all for my own safety”, revealed Stilgo. “Instinct took over. I just knew I had to push through if I wanted to beat the squadron’s highest score.”

With cramp from sitting for so long distracting him almost as much as a discussion on a Call of Duty forum, Stilgo demonstrated remarkable fortitude as he continued to dispassionately dispatch the enemy.

“It wasn’t personal”, claimed the ace, “although I did once pick out a face on the 24-inch HD monitor. Fortunately my quick-thinking sergeant swiftly smeared the screen with some vaseline.”

Stilgo insisted that while the medal was a great honour, it wouldn’t change him. “My only regret is that I didn’t wear wrist splints.”

Filed under Around Harold, Society, War