Government spy to be put in every house in village 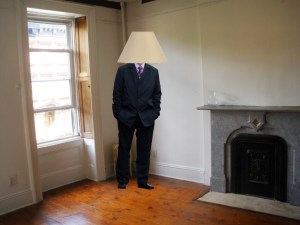 The government is to trial putting a spy into every house in Harold to listen in to every conversation so they can be sure you are not an ISIS.

The plans, which if successful will be rolled out across the country, will see an agent from MI5 or GCHQ put into the corner of every living room in the village disguised as a standing lamp holding a laptop in a bid to be unobtrusive yet able to note down your every word.

“I understand their concerns” resident of the Over-The-Hill care home Elsie Duggan, 86, told us, “and with my memory I can’t remember whether or not I am an Islamic fundamentalist. It’s reassuring to know he is keeping an eye on me.

“That said, it was a little off-putting when I had a ‘friend’ round to recreate scenes from ‘Fifty Shades of Grey’. The agent had such a geeky giggle we eventually had to put a sock in his mouth, which actually fitted in nicely with our reenactment.”

“There is a tiny, tiny minority in this country that want to do the UK harm, so if we spy on everyone we can be sure we follow the bad guys.

“Granted, following the bad guys hasn’t always worked in the past seeing as we followed the 7/7 bombers and Lee Rigby’s murderers but we also followed that Brazilian lad in London and we got him. Ok, he hadn’t done anything wrong, but we still got him.

“But as they say, if you have done nothing wrong you have nothing to fear having a spy in your house watching your every move.”

Mr Chadwick MP then took a moment to think about what he just said, shouted “oh shit” before running towards his house screaming “get him out, NOW”.