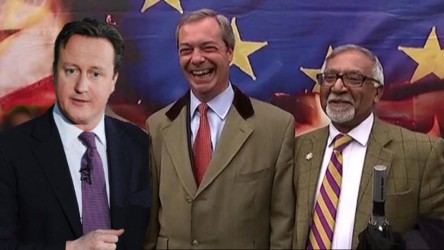 Following his move in 2012 from the Conservative Party to UKIP, and then his more recent move from UKIP to the Conservative party, David Cameron and Nigel Farage have finally agreed a joint custody deal of the he’s-foreign-born-so-we’re-not-a-racist-party MEP, Amjad Bashir.

“It’s been a long battle, but we have decided that it will be so much easier to claim some of our best friends are foreign if we have him during the week and UKIP have him at weekends,” Prime Minister and Tory leader David Cameron said.

“Of course there may be times when Nigel or one of his party slip up and need to play the ‘how can we be racist’ card Monday to Friday, so we will let them have him for a one hour supervised press conference, as long as he is back before tea.”

Nigel Farage has said having a foreign born MEP to call on for when media pick on his party by purposely recording a member being racist, sexist, or just a bit ‘Ukippy’ is useful, however it goes against his British jobs for British people mantra.

“I’ve employed an Englishman called Derek who is willing to black up should the occasion call for it on a weekday,” Farage said as he handed over a written apology for his last statement.

“Trouble is, you try getting the English to work weekends. Although I have a general unease at having to be in a room with someone with an accent, Derek only puts his on when we need him to, unlike Amjad, who I never understand a bloody word he says. I can’t put my finger on it, I think it’s Yorkshire, but definitely north of Watford. Here’s another apology”