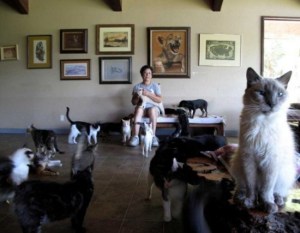 After days of terror where gangs of cats peed in neighbour’s gardens and bailed up dogs while the cats owners chanted ‘cats are great!’, moderate cat ladies have been urged to condemn extremist cat ladies.

The attacks seemed to be in retaliation to an unflattering depiction of a cat in the latest issue of the Harold Kennel Club’s monthly magazine, but most villagers say a poorly drawn cat by a dog owner can never be an excuse for a feline rampage.

Harold Mayor Rufus D Jackson appealed for calm saying that while the actions of extremist cat ladies were abhorrent and should be condemned, cat ownership itself is a peaceful pastime, and society will be stronger if cat owners and dog owners stand united against extremism in all its forms.

Mayor Jackson pointed out that Sally Evans, the hero of the siege at 44 Blumley Way, was herself a cat owner, and her quick thinking in luring 28 cats away with a bag of Purina One (turkey flavour) saved three nervous Labradors substantial further humiliation.

The Mayor’s speech was politely received, but opinion in the village remains polarised.

“I don’t know – is there really such a thing as a moderate cat lady?” said Councillor Ron Ronsson, who changed his Facebook picture to ‘I am a dog’.

“They might start with just one or two kittens, but then they become radicalised online by viewing 1,000s of cute cat pictures. Before they know it they have 20 plus cats and the shortage of cat litter means they all jump the neighbour’s fence and pee in their sandpit.”

“Just because a couple of cat ladies go feral doesn’t mean they all do” said Julie Kettle. “I mean just yesterday I was walking on Harold Common and I stepped in a pile of dog poo. Did I blame all dog owners? No, I just quietly scrapped the poo off my shoe and stabbed the dog to death with a knitting needle.”

Emilie Bourdain, who runs a wildlife sanctuary on the outskirts of Harold, said the issue was complicated.

“It’s all very well blaming the 40 year old recently divorced woman for these sort of incidents, but what is the root cause? They have to get the cats from somewhere and for that I blame the Cats Protection people.”

“They solicit donations, amass large numbers of cats, and most shockingly, they groom them. How can you blame anyone for getting a couple of extra cats when their fur looks so perfect?”

Filed under Around Harold, breaking news, Law and Order