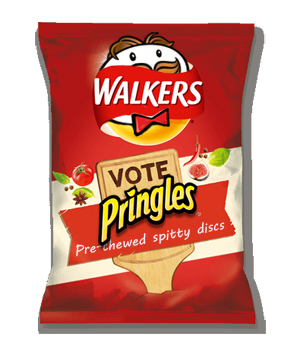 Fans say the flavour is the perfect accompaniment to drool.

Advertising executives for Walkers Crisps were left red-faced today, and not just because of their colossal salt intake.

“It was a close call”, said Hilda Remington, as she clutched at her heart and gasped for breath. “But in the end, the public have somehow found the energy to have their say.”

“The real surprise was the second-place flavour, and it’s something that we were sure would win”, wheezed Remington.

“That one was ‘the starchy mush picked out of my teeth after finishing another packet’. That’s my personal favourite: would you like to try a fingernail-ful?”

“Sorry, not that one. That one’s pulled pork. Or was it chicken curry? It’s sometimes hard to tell the difference.”

Comments Off on Walkers crisp competition won by ‘Pringles flavour’