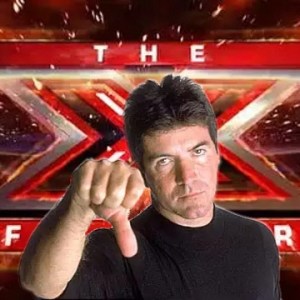 Pop mogul Simon Cowell has rejected calls to change the voting system for the X-Factor. Under the changes, that will see voting devolved based on intellectual groups, only morons will be able to vote on issues that affect morons meaning only viewers with an IQ under 76 will be eligible to vote contestants off his show.

“This will lead to the end of the X-Factor,” Mr Cowell said worriedly, the first time those words have not been uttered in a celebratory way.

“If we are relying on those whose IQs match the contestants, then we are setting ourselves up for a lot of phones broken as they try to dial the numbers with their fists and foreheads, and not many lucrative votes.

“We had trialled a postal voting system but that failed when those morons taking part either posted their phones or stuck their eyelids together with stamps.”

David Cameron held a meeting of top Tories to discuss bringing in the intellectually devolved X-Factor voting system in at the same time as granting Scotland greater powers, a move some believe could be dangerous.

One commentator explained: “the biggest fear is that the average Tory voter fits into the IQ limit proposed. If they can vote Cameron into Number 10 just imagine what shit they could get to Christmas Number 1.”

However, unlike the English vote for English issues idea Ed Miliband has told the Labour conference he welcomed the proposals.

“I always said that even at the top of the political system I would never forget my roots,” he told delegate.

“If it wasn’t for morons voting for a moron, I wouldn’t be where I am today.”