Thatcher rises from grave to help save Union 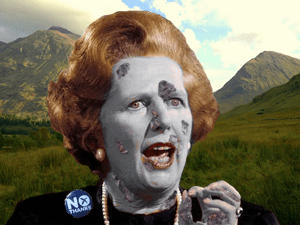 Ironically, it’s the only union she didn’t try to break.

In a dramatic (and slightly gruesome) turn of events, former UK Prime Minister Margaret Thatcher has risen from the dead to wade into the battle to save the Union.

As polls show the pro-independence campaign taking the lead for the first time, Tory chiefs have made the momentous decision to deploy their ultimate weapon: the Thatchernator.

Using the dark arts of necromancy and voodoo, which many of the upper House are experienced practitioners of, Better Together leaders claim they had ‘no choice’ but to reanimate their dead leader.

In a move that the opposition has declared ‘outrageous’ and ‘desperate’, one backbencher told us that those on the Westminster gravy-train were so worried about the potential loss of Scotland that they were prepared to risk their second homes being over-run by undead relatives to prevent the break up of the 307 year-old Union.

“My great-great-great-Grandfather was a Tory MP” said one Member of Parliament who wished to remain nameless in case his children succeeded in having him sectioned, “and he would turn in his grave at the thought of the wealth we’ve amassed as a family through fiddling our expenses and utilising slightly irregular tax laws. At least he will once I’ve managed to reanimate him.”

Surprisingly, Labour is also backing the soulless zombie and her stance on Scotland. “Well we would, wouldn’t we?” said Alistair Darling. “She may never blink, she can’t eat properly and her awkward movements prove she isn’t human. In many ways, she’s very similar to Ed Miliband.”

5 Responses to Thatcher rises from grave to help save Union