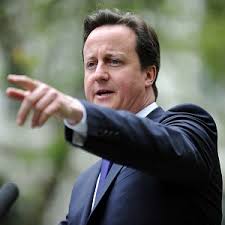 “Yes, you on the right with the big wallet. Did you have a question for me?”

David Cameron has clarified that it’s Tory supporters’ and city bankers’ families will most benefit from any future Government policies.

“I thought it best to make that clear, far enough ahead of the election for other people to forget it.”

Hundreds of thousands of households are causing a serious drain on public resources with ‘off the barometer’ dysfunctional behaviour, says Cameron.

The PM today announced a significant amendments to the Troubled Families programme, initially set up to help 120,000 seriously troubled families.

“We found money raised by hard-working taxpayers was propping up lazy, feckless idiots who were never going to vote Conservative anyway, however much we gave them. We’re now cutting out all that stuff.”

According to respected social commentator, Richard Littlejohn, up to half a million problem families ‘cost us taxpayers in excess of £30billion’ annually. Enough to pay the annual bonuses of 100 top bankers or support a failed financial institution’s shareholders for a year.

“True, most of them don’t pay much tax” said the PM “but any future government policy must pass a stringent test, assessing its impact on families with inherited wealth and social position.”

“So, I’m pleased to announce that tens of bankers will also receive free relationship counselling sessions to help them stay together with their money.”