House of Lords overcrowding ‘due to too many mild winters’ 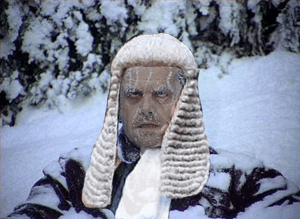 The eyes have had it.

“Unless we get a severe cold snap, it may not be easy to lever in everyone who’s bought a peerage” said worried Tory Treasurer Lord Fink “so the PM will check long-range weather forecasts before making his final decision on numbers.”

After the Fred Goodwin scandal, big-money party donors saw that knighthoods could be lost for trifling matters, such as misplacing billions of pounds, and were more willing to stump up the extra for the guaranteed security of a peerage.

“With one of those you could roger the Queen’s favourite corgi and still be set for life, so the funds poured in. Unfortunately, centenarian peers will keep toddling in to pick up an attendance allowance and a pleasant luncheon and so we’re running out of space.”

The Government now pins its hopes of solving the capacity problem on a really cold winter. “A decent fall of snow should give plenty of falls and driveway-clearing heart attacks in the UK” says Fink “whilst for the more adventurous snow-sports enthusiasts there is always the prospect of drinking themselves to death in Chamonix.”