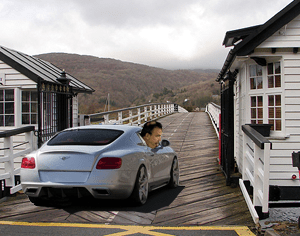 Clarkson entertains a worker by pointing out his ethnicity.

Motoring bigot Jeremy Clarkson has opened the first troll bridge in Britain, which allows drivers to abuse migrant workers and then drive off at speed.

Snipping the BBC red tape using a sort of scissor sign with his fingers, Clarkson explained that this represented England’s victory at Agincourt.

“The troll bridge gives motorists a chance to express themselves”, said Clarkson. “But being in a car, you can roar away before the recipient can complain.”

Clarkson explained how the system works. “You stop at the barrier, racially abuse the member of staff in the booth, then congratulate yourself on having a nicer car than them.”

Although so far only the Top Gear team have actually crossed the troll bridge, it’s attracted over 5,000 complaints.

“They’re just jumping on the bandwagon, you have to actually use the bridge before you can really be offended”, said Clarkson. “Or sit in the booth. That might work too, thinking about it.”

The BBC has acknowledged that racism shouldn’t be allowed to slip past so easily, but has so far failed to discipline the star. “We would have done something, but this uncivil structure makes us a lot of money. Which is surprising, because much like our shoulders, it has a slope on it.”