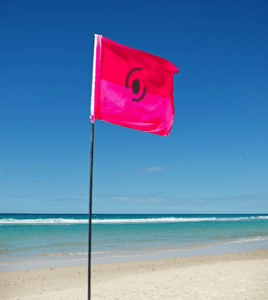 Beaches displaying the new flag may be heavily pot-marked.

Britain’s coastguard has introduced a new warning flag, to alert holiday-makers to the risk of beach fatties.

Resplendent in two colours of sunburn and a symbol representing an ‘inny’ belly button, the flag draws attention to the chance of big bathers.

“There are many dangers along our coast, and we’ve got a number of flags to highlight them”, said warden Helen Evans. “But until now, there’s been nothing to prepare you for the vision of a fat lad wearing Speedos on a li-lo.”

When the new flag is raised, those of a sensitive disposition are advised to hide behind a rock or at the very least, avoid looking down.

“A sweat-pooled navel amidst a wobbling mound of gut can spoil even the best-planned family picnic”, warned Evans. “Sure, you can take precautions such as erecting a wind break or smearing your children’s eyes with sun cream. But sometimes, it’s better to just hit the arcades.”

Greenpeace has welcomed the initiative, claiming it could save their volunteers a fortune in lanolin. But unfortunately, the plan has hit a snag.

“For some reason, the new fat flags simply refuse to flutter”, warned Evans. “And in a number of spots, they’ve somehow managed to snap the flag poles in two.”

Comments Off on Coastguard launches ‘Fatties on the Beach’ warning flag

Filed under Around Harold, Health