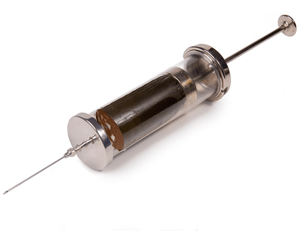 A butcher in Leeds has released a high perfomance blood sausage to celebrate the Tour de France coming to Yorkshire.

On the outside, the pud looks like any other in his shop, but it contains around 15% more blood.

“Using a technique I developed after reading Lance Armstrong’s book, I extracted a good sized cupful of blood from each of these beauties”, explained Derek Arkwright.

“This I stored in a secret fridge away from council inspectors, while the puddings recuperated behind the sneeze guard. To see them nestling there, next to the strips of decorative fake grass…you’d never know they were destined for greatness.”

Once the puddings had naturally regenerated the missing ingredient, Arkright injected the original sample back in. “It gives you a powerful sausage that’s slightly better on hills”, he claimed. “It’s the weight you see, it makes them roll a bit quicker.”

Just like the cyclists, Arkwright wraps his puds in gawdy tight lycra, which he claims is to stop them from splitting.

“We did experiment with steroids, but that didn’t really work”, he admitted. “Who knew that injecting hormones would cause your sausage to shrink?”