‘But I must have more blood’ says Blair 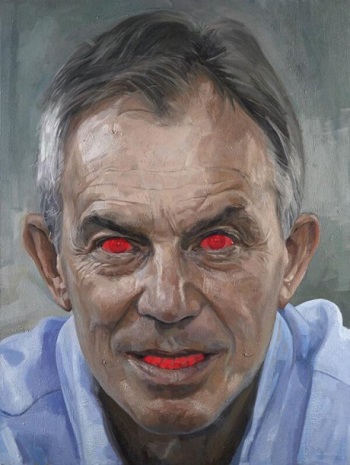 Prince of Darkness and Supreme Evil Being Tony Blair has insisted that the West should again go to war in Iraq to provide him with a supply of the fresh blood of the innocents which he needs to retain his youth and immortality.

Commentators from across the political spectrum have denounced the returning of troops to the country as absolute insanity, but Blair is adamant that a resumption of conflict is the only way he he will be able to gorge on the human blood he so desperately craves.

“Look, I’m a pretty straight guy,” he explained to reporters this morning. “And, you know, my blood lust shall be sated. Great.”

Even former supporters of the undead fiend have expressed misgivings at his unquenchable thirst for the human life-force. Former Deputy Prime Minister John Prescott, speaking at a press conference in the banqueting hall of a huge ruined mansion by full moon as a nightmare bell tolled the mournful midnight hour, was concerned that his former boss might be going a little too far.

“The master mustn’t do this, no,” he gibbered hollowly. “At first the others… I thought it would stop, but now it’s too much, too much blood! Evil, terrible, kind master…”

A spokesperson for the Stop The War coalition demanded immediate action. “Tony Blair must be transfixed with a stake of wood through his heart, and thrown immediately into the deepest pit.”

“We don’t believe he’s a vampire or anything,” he added, “We just think it would be a really good idea.”

One Response to ‘But I must have more blood’ says Blair