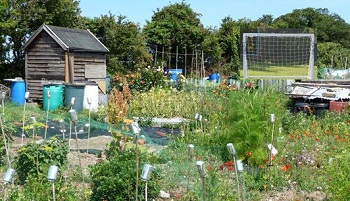 Hopes for an improvement in the condition of the pitch for England’s opening match are high after local gardeners agreed to remove their allotments from the playing area for the duration of the game.

With 48 hours to go to the kick off it was clear that a lot of work was still required, but the head groundsman was pleased to report that the field was looking more ready for football with the goal nets having been hung on the runner bean poles now relocated to either end of the ground.

“We’ve still got to move quite a few sheds and tin huts,” said Carlos Botella, who also runs a market garden business from the Manaus stadium. “We’re going to put these at the sides of the pitch so they can be used as dug outs and press boxes.”

Once we’ve cleared the bigger items we can mark out the pitch,” continued the green fingered groundsman, “things grow pretty quickly here in the Amazon jungle so I’m planning to plant out the lines with white cabbages and sweet peas.”

Although England manager Roy Hodgson has taken the condition of the pitch in his stride, jokingly comparing the sparseness of the grass to the lack of hair on Wayne “Spud” Rooney’s head; his jolly suggestion that “the natives only understand blow pipe football” may not endear him to the local football fans, who tend to carry spears when they’re not wielding rakes and spades.

BBC has called up Graham “Turnip” Taylor to their commentary team who is expected to pay special attention to England’s back row of vegetables, and their midfield of weeds.

Editor’s Note: Whilst other publications have filled their pitch reports with references to agricultural tackles, scything down of opponents, digging for victory with photographs of radishing WAGs, the Evening Harold has decided to rise above this cheap journalistic approach to a matter of such national importance.

However we reserve the right to compare the game to the trench warfare and the Battle of the Somme if things turn nasty.