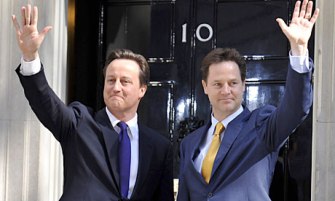 It’s May and election results are pouring in. To be honest they’re not looking that good for the Conservatives. Just like four years ago, hey? Except as the sun began to rise on that particular May morning I realised how attractive you were, you had that elusive ‘enough seats so I could be Prime Minister’ quality that no one else did which combined with your lack of shame and political convictions made you irresistible.

And what times we’ve had, eh Nick? What glorious times!

I screwed the country rigid and you said nothing: it really was the perfect partnership.

But now it’s time for me to be honest, painfully honest, with you.

I’ve met someone else. His name’s not important but it’s Nigel Farage. He’s charming, he’s witty, he’s…oh, I could go on and on and giggle like a schoolgirl as I do! He has this ability to have already gained 80 seats in the local elections even though two thirds of the results aren’t in yet that is just intoxicating. I’m sorry Nick but that turns me on so much more than your loss so far of 55.

I love Nigel and I love the thought of what a Tory/Ukip pact would mean in May 2015. I love these things far more than I love you and those crushingly boring plebs you call a party.

P.S I assume you’ll be looking for a new job in a week or two. I’m sure you’ll find something that fits your very particular skill set on Universal Jobmatch. Iain assures me it’s marvellous.