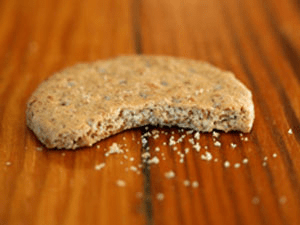 Medical experts are calling for greater awareness of the ‘5 second rule’, the safe time limit for eating food after it’s fallen on the floor.

The campaign comes after the death of a man who ate a gravitied Hobnob, that had been on the carpet for over a quarter of a minute.

“Some jokers seem to think these rules don’t apply to them”, said Harold GP Doctor Evans. “Eating floor food after 5 seconds has passed can easily kill you. Or failing that, make you stronger.”

Evans claimed that scientists had got through ‘a whole mountain of monkeys’ to prove that allowing lunch to languish too long would be the last thing they did.

“It’s basic stuff, we’ve known about this for years”, said Evans. “Do you think Newton would have picked the fluff off the apple and given it a rub on his chemise, if it had been on the lawn for more than 5 Mississippis?”

The latest victim died just 2 hours after consuming fallen foodstuffs, ‘too much of a coincidence’ according to Evans.

“It’s clear to see that his recklessness contributed to this man’s demise”, he concluded. “It was either the biscuit, or the fact his parachute had just failed to open.”

Comments Off on Man dies after ignoring ‘5 second rule’