No.10 worried as Nigel Farage proves fitness for government by fiddling expenses 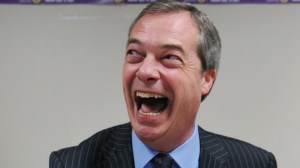 Or did he? Does this face say honesty and trust to you? We’re not sure.

There is consternation inside Number 10 today as Nigel Farage has finally proved his fitness to play a top flight role in British politics by fiddling his expenses (allegedly) and then adamantly denying that he’s done anything wrong.

“This changes everything,” said a Downing Street insider who gave their name only as George Osborne. “We’ve been dismissing Farage and his swivel-eyed loons as outsiders who only appeal to a mere two thirds of the rank-and-file Tory membership. Now he’s proved he can behave with all the selfishness and arrogance of a member of the Cabinet we’re a bit worried.”

With David Cameron on holiday his Cabinet Office colleagues are desperately trying to regroup and come up with a plan of attack to accommodate the fact that Nigel Farage has started to behave just like them.

“It’s hard to come up with a new approach,” George Osborne said. “We’ve been dismissing Nigel Farage and Ukip as a joke for so long and we know that the electorate like a bit of comedy with their politics.”

He looked sad and confused for a moment before smiling.

“At least whenever we need someone to laugh at there’s always Nick Clegg.”

2 Responses to No.10 worried as Nigel Farage proves fitness for government by fiddling expenses