20% ‘would not get invited’ to gay wedding 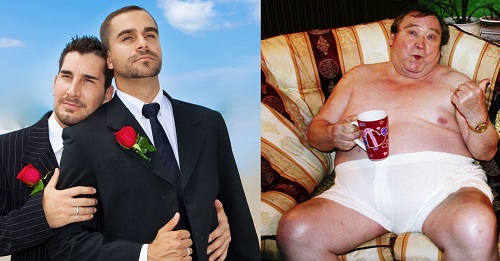 Don’t hold out for that invite, Bernard…

Following BBC research revealing that 20% of people would refuse to attend a gay wedding, another poll coincidentally found the same percentage of people “simply too drab and awful” to get an invitation to one anyway.

The BBC Radio survey on the eve of legislation allowing same-sex marriage in England and Wales also found that fat, stupid men were nearly twice as likely to be kept away as slim, funny attractive people like us.

The poll of 1,007 people found 68% agreed gay marriage should be permitted, with 32% too wrapped up in wallowing in their own filth to respond.

A spokesman for lesbian, gay and bisexual charity Stonewall said the percentage of people standing no hope in hell of being invited to such smart social functions was “about what we’d expect, looking at the number of knuckle-dragging mouth breathers you see around the place.”

But Catholic Voices, which represents the Catholic Church, said the findings of the survey reflected the reality that many people remained “deeply uncomfortable with culture, refinement and ideas more recent than the middle ages, and that’s how we like them, frankly.”

Father Montgomery Edmunds, a member of the organisation and a Catholic priest in Greater Manchester, said: “As the Church, we love those seeking a same-sex union, or at least we say we do, in a very patronising way. What we mean is that we hope they burn in hell, along with their excellent grasp of culture and snappy tailoring. And their firm, firm abs and delicious tight buns. Sorry, strayed a bit myself there…”

“In our modern culture it is increasingly difficult to have an open debate without being labelled as bigoted or intolerant, especially if you are.”

Comments Off on 20% ‘would not get invited’ to gay wedding