Farage denies having a stooge during EU debate: “that was Clegg” 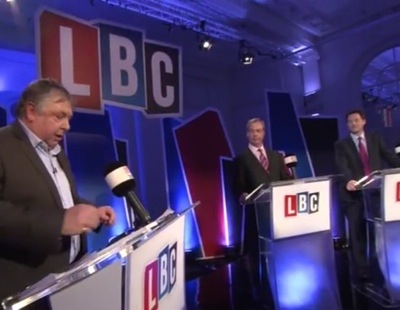 Nigel Farage has been accused of cheating following the LBC EU debate this evening. The Ukip leader has been forced to deny having a stooge in the debate and said the person accused of being placed in the room to make him look good was actually Nick Clegg.

The debate over the UK’s membership of Europe was the first of two, with the second happening next week, and was designed to be between two leaders on the pros and cons of membership.

But David Cameron and Ed Miliband both declined the opportunity so Farage and Clegg took part instead.

“I promise he has nothing to do with me,” Farage said after the debate. “I thought he was supposed to be there to help people see what a little Englander I am.

“I even starting making things up to give him a chance, but every time he opened his mouth, he seemed to make me look a bit more credible.

“That’s something a team of Ukip PR experts haven’t been able to do. I may even offer him a job when he grows up.”

2 Responses to Farage denies having a stooge during EU debate: “that was Clegg”