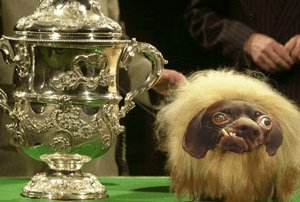 Oedi comes from a proud line of dogs that have all been in their mother at least twice.

A West Norfolk Terrier has seen off some tough opposition to be crowned Crufts 2014 ‘Most Inbred Dog’.

With paper-thin skin, no kidneys and a face racked with pain, ‘Swingalong Oedipus IX’ was recognised by judges as the best example of his inbreed, at least amongst the few that survive.

“The finest ones, the ones with no jaw and those darling webbed eyelids, well most of those don’t live much longer than a month”, said trainer Helen Delaney. “And that doesn’t give us much time for weaning, having a pace maker installed or training them for the show arena. Mother Nature can be awfully cruel.”

In a tantalising final which saw a staggering 63% of entrants survive, Delaney’s pride and joy saw off stiff competition from a pair of siamese Yorkies, a gelatinous Alsatian and a spaniel in an iron lung.

Delaney is enormously proud of 6 month old ‘Oedie’, as her family call him. She insisted that her dog is treated like a normal pet in the family home, and will continue to be loved until medical science inevitably fails him.

“My daughter loves Oedie to bits, although it’s nothing my vet can’t stitch back together”, revealed Delaney. “She does scream a bit when he sweats blood from his eyes, and she has the odd night terror about him coughing out his lower colon again. But she can normally poke it back in without any help. Last time, she didn’t even vomit.”

Helen shares her love of show dogs with her family, and hopes to one day pass on the baton to her daughter.

“She’s a chip off the old block, she comes from a long and proud line of people who breed dogs with their own pups”, beamed Helen. “When I look her in the eye, she reminds me of me. She must get the fused eye socket gene from my side of the family. Or her father’s. To be honest, it’s less of a ‘family tree’ than a well-chewed stick.”