Benefit claimants to be fracked for wasted energy 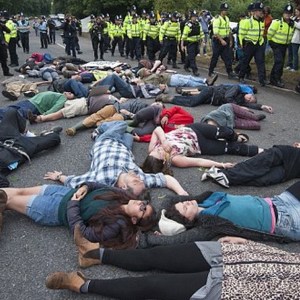 Harold’s Dr Evans has been selected to help trial a new combined health and domestic fuel supply initiative for people suffering from conditions such as obesity and laziness, based on the same technology used in fracking for shale gas.

“Government scientists think there could a lot of re-useable trapped energy in the bodies of people who don’t get enough exercise,” said Health Secretary Jeremy Hunt, “especially the ones who are out of work and claiming benefits.  Fracking fat, lazy people for the wasted energy they have selfishly trapped inside themselves is one way of helping them to give something back to society.”

The technique involves drilling into the patient, pumping in corrosive acids to break the body tissue apart and setting off explosions to dislodge trapped energy, which can then be collected in underground tanks and fed into the nation’s domestic fuel supply.

Critics of the technology say there is a risk that the corrosive acid could get into the patient’s blood and they could be traumatised by the internal explosions.  As local psychologist Freya Anderson told the Evening Harold, “At the very least, it’s going to leave people feeling deflated.”

“It’s only a trial,” said Dr Evans, “and the whole project will probably be ditched when they realise it doesn’t achieve its goal.”

He cited his first case, involving a benefit claimant who came to his surgery suffering from trapped wind.  “I managed to shift it just by explaining the procedure.  What a relief that was.”

“What’s really needed,” said Dr Evans, “is some sort of mind-fracking on politicians, drilling into their thick skulls to relieve them of the crackpot ideas that get trapped in their heads.  If only we could convert their crazy notions into energy, we could all have free heat and power forever.”

Comments Off on Benefit claimants to be fracked for wasted energy