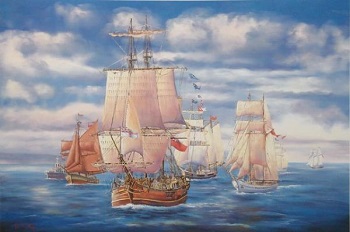 The Australian government has announced that this year’s Australia Day will be commemorated by finally dropping the lines in the second verse of the national anthem which go:  “For those who’ve come across the seas, We’ve boundless plains to share”.

Prime Minister Tony Abbott announced the change at a press conference this morning, expressing his “deep concern” that the words ever got put there in the first place:

“I thought I ought to know a bit about the old anthem, being Prime Minister, and after reading through it a few times it just sort of leapt out – what the hell is this bullshit about people coming across the seas?”

Abbott has been criticised for alleged abuse of asylum seekers by the Australian navy, and for keeping others in offshore ‘processing camps’ where limited medical facilities has caused the death of children, but he is unrepentant, pointing out the ‘devastating’ effect on house prices and traffic congestion that allowing a few thousand foreigners in would cause.

“We true Australians are fed up with these people thinking they can come over here in boats and enrich themselves,” explained the London-born millionaire PM.

“With Australia day coming up, it’s a great time to reinforce what Australia really means. And what it means is: ‘go home darkies’.”

“One thing that continues to puzzle me,” the great man pondered, “Is who let all these aboriginals in? They were already here when I came to power, so it must have been the previous Labor administration, and now we’re paying the price.”

Civil servants have been hurrying to find replacement words to fit in the second verse of the anthem, so that it still fits the music. “We think we’ve got it,” Abbott announced proudly, “It goes like this: ‘For those who’ve come across the seas, Fuck off, we’re full’. Ripper!”