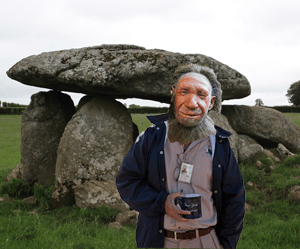 Archaeologists have found earthen jam jars, crude tea towels and an early pen with a feather stuck in it.

A team of archaeologists has made a startling discovery near Stonehenge – an ancient visitor centre, dating back to the Mesolithic period.

Crudely constructed from stone and featuring ramp access for chariots, the ancient visitor centre was found while digging the foundations for a new visitor centre on the same spot.

“At first we weren’t sure what we’d found, which means it was definitely for ritual purposes”, said local historian George Hubert. “But we kept on digging, and soon discovered what appeared to be a diorama.”

The diorama is thought to represent the famous circle of standing stones, but was clearly made from old teeth and bits of knee caps.

“We’re not 100% sure, but that might be because stones were very valuable in the early times”, explained Hubert. “Either that, or visitor centres were just as disappointing way back then.”

Hubert isn’t sure what can be learned from the visitor centre, which makes it remarkably similar to the one that’s  been built in its place. “Computer simulations show it took a lot of effort to construct”, he explained. “But somehow it adds virtually nothing to our understanding of how ancient Britons used to live and detracts from the beauty of the ancient site. Just like the new one.”

Artifacts from the site suggest early settlers placed value in some rather peculiar objects.

“So far we’ve found a small and extremely crude model of a dinosaur, an early wind-up flint, and a pencil with a bright pink feather stuffed in the end”, he revealed. “And more bafflingly, we’ve discovered dozens of rocks with googly eyes on.”

Hubert explained that scholars had until now believed that our ancestors had a surprisingly sophisticated society, but these new discoveries reveal that they were in all likelihood ‘complete idiots’.

But as Hubert told us, a fragile pamphlet did reveal some secrets. “At last, we now know what Stonehenge was built for”, he said. “Each monolith aligns with the sunrise on the days when the centre was open. It’s a very early method of identifying bank holidays.”

Hubert hopes to explore the site in more detail, but time is against them. “This remarkable structure is bound to draw in more visitors”, he surmised. “But unfortunately we’re going to have to flatten it, because we’ll need a bigger car park.”