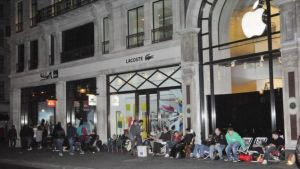 Progress: 70 years ago we queued for rations, now we queue for shiny things and no one has to pretend that they find Tommy Trinder amusing.

Today is Cyber Monday the busiest day of the year for online sales during which Britons will spend over one billion pounds on PlayStation 4s, Breaking Bad box sets and inflatable toast (seriously, that is a thing). While most of us relish shopping naked and not getting arrested or uploaded to YouTube, and Amazon’s agency drones will be forced to walk the equivalent of to the moon and back before being allowed their first break, idiots are lamenting the lack of queuing.

“That’s the best part of shopping for me,” Harold resident Sharon Carey told us. “I take a few days off, get out my special chair and sit on the pavement for days happy as you like. Last Cyber Monday I tried sitting in front of my laptop for a night then getting my husband to declare it open in the morning but it wasn’t the same.”

“Cyber Monday is rubbish without queues,” said Jason Beesley, a self-confessed gadget freak. “Why do I want to get a great deal on the new iToss if I can’t put a photo of me holding it on Facebook hours before anyone else is even in town? Shopping without bragging is like Ant without Dec – it’s very hard to see what the point is.”

Harold’s champion queuer is pensioner Elsie Duggan who in total has spent over three weeks of her life in line for Cliff Richard concert tickets. Though she nearly stopped for good last year when she made it to the front and almost had to buy some.

Comments Off on Cyber Monday: idiots saddened by lack of queues