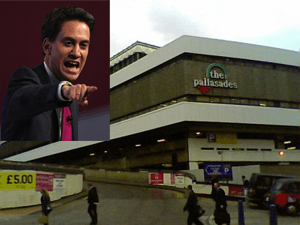 Major parties blame each other for Birmingham.

Labour leader Ed Miliband has thrown his full weight behind a campaign to allow the UK to have a referendum on Birmingham.

Miliband has been criticised recently for a lack of credible policies, but the ‘Birmingham Out’ proposal is set to change all that.

Seen as little more than a car park by many, but a car park with a miserable accent, Birmingham is the ‘Elephant in the Midlands’ according to political pundits.

“When you look at opinion polls, hardly anyone backs a sustained Birmingham”, claimed Ed’s gopher Martine Alcock. “It’s definitely the worst thing that affects the Midlands, if you ignore Stoke.”

Alcock thinks tackling the sprawling pit of misery could restore the public’s faith in politicians, while freeing up valuable land to build a much-needed ‘New Town’.

David Cameron hinted at cross-party consensus on decommissioning ‘The Sh*tty City’ and ‘turning it back to fields with all cows on’.

“We’ve been aware of Birmingham for some time, and we’re working to reduce it”, insisted the PM. “To that end, we’re ploughing in the M6 from both ends and planting turnips. They should do well, apparently the soil is really good for yam yams.”

Politicians on all sides are ratcheting up the Birmingham rhetoric, with Vince Cable calling for the government to be ‘tough on Birmingham, tough on the causes of Birmingham’ and Nick Clegg declaring he ‘is not at home to Solihull.’

Sensing he might be ahead of the game, the Labour Leader is pressing home his advantage. “Urban renewal has worked for some unsightly places, but you can’t regenerate a turd”, Ed Miliband insisted. “HS2 won’t fix it, so let’s try H2SO4.”

Clare Short is incensed by the attack on her city and has spent hours moaning about ‘easy targets’. But no-one noticed, because brummies always sound like that.

One Response to Ed Miliband calls for ‘end to Birmingham’