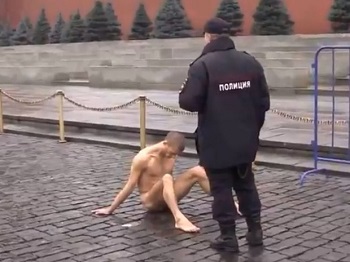 A performance artist has been detained in Moscow after nailing his scrotum to the cobblestones of Red Square in a protest against the ‘appalling’ condition of recent resurfacing work.

Pyotr Pavlensky, 29, sat in the square for an hour on Sunday with a nail driven through his genitals into the ground, as a metaphor for the poor-quality asphalting following roadworks.

Timing his act to coincide with National Motoring Day, Pavlensky said in a statement: “When the authorities turn the country into one big roadworks, openly ruining our suspension, it is time for honest men to nail their bollocks to the road.”

A spokesman for the RAC, while not condoning the artist’s actions, confessed a certain sympathy: “With road surfaces getting as bad as they are today, who among us has not felt the rough grind of uneven cobblestones against their testicles? We don’t suggest that our members join Mr Pavlensky in scrotal impaling, but we would not criticise them for doing so.”

Before being dragged away by the heavies, Pavlensky was surrounded by cheering family crowds, leading some to speculate that his protest could ultimately be the most influential since Martin Luther nailed his penis to the door of Wittenburg Church in 1517, in his famous objection to the town’s new one-way system.