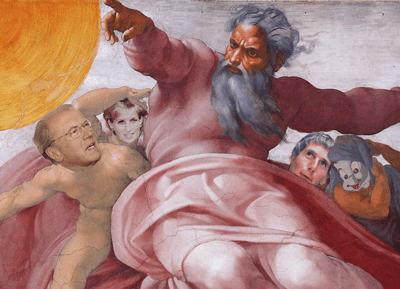 Despite omnipotence, God may still need to rely on coalition with Nick Clegg.

Omnipotent Christian deity God has spent the day changing some faces in his cabinet in the first reshuffle for over 2000 years. Many involved are household names and the shake up is seen as significant on earth as it is in heaven.

The big loser is God’s long time wing man Jesus of Nazareth, whose coveted position of ‘sitting at the right hand of God’ has gone to Princess Diana. The heavenly father has recently faced fresh accusations of nepotism as well as a failure to represent females in positions of power, and has seemingly smote two birds with one stone.

The third member of the holy trinity ‘The Holy Spirit’ retains his/her/its position as minister without portfolio.

Long time keeper of the pearly gates St Peter handed in his resignation earlier in the week amid speculation of the imminent re-shuffle. St Peter’s position has been under increasing pressure over the longrunning ‘plebgate’ affair in which he’s accused of denying Nelson Mandela access to heaven and accusing Mandela of calling him a pleb, a charge Mandela has always denied. With Sir David Frost announced as St Peter’s successor, its expected Mandela will soon make another bid for access.

Perhaps the most shocking appointment is a new role for Pontius Pilate. Pilate has a somewhat chequered history within the party, however many say his martyrdom to washing his hands of things makes him the ideal candidate for Health Minister.