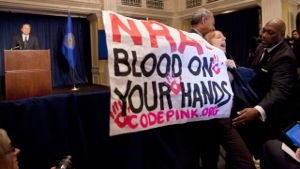 Following another tragic shooting in America yesterday, the argument for stricter gun controls has resurfaced.

With many calling for the owning of guns by crazed maniacs to be made illegal, the Nation Rifle Association (NRA) has once again defended the right to bear arms and suggested an alternative idea.

“After the Sandy Hook tragedy we recommended the routine arming of teachers as a sensible solution to stop psychopaths killing at random, and some states even made the idea policy” said Wayne LaPierre, executive Vice President of the NRA.

“So now we are calling for the US Navy to become routinely armed. But having looked into the locations of Navy bases we noticed they were all close to water so we would go further and give them boats that have the ability to fire bullets.”

“And why stop at the Navy. The Air Force and Army are at just as much risk. If the government make sure our soldiers have guns, we will send some of our more rational members to train them to use the firearms correctly”

Tragic shootings in USA are becoming a regular occurrence, but thanks to the successful ‘war on terror’, perpetrators are not Al-Qaida terrorists but disgruntled Americans.

In meetings this week between John Kerry and Russia’s minister of foreign affairs, Sergei Lavrov, it is thought the Russian will pass on a message from the Syrian regime asking all Americans to hand their guns to the UN until they can be trusted to use them sensibly.

Comments Off on NRA: ‘Stop repeat of Washington shootings by routinely arming Navy’