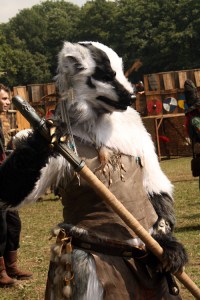 “We were following a trail and then suddenly through the darkness I saw this massive badger, must’ve been six foot at least,” said Phil Evans, local farmer and badger culler. “And I thought ‘bugger me it’s a good job they’re culling the stripy sods if there’s giant mutant ones knocking about.’ It was only after I’d let off a couple of shots that it occurred to me that badgers don’t usually carry swords and scream ‘please no, oh my God put the gun down’ before you shoots ’em.”

Evans and his colleagues were startled to see that the woods were in fact full of adults dressed as a variety of fauna with badgers and tigers being amongst the most popular costumes.

“They said they was furries,’ Evans explained. “Apparently they like to dress up as badgers and foxes and all the rest of it, pretend they’re all warriors and then have a bunk up. Whatever gets you through the night I suppose but they really shouldn’t have been out there when we was looking for something to kill.”

The panic and confusion that followed led to several furries being taken to Dunstable Royal Infirmary to have shotgun pellets removed from their bodies and one of the cullers being taken in for psychiatric observation after the sight of a couple dressed respectively as a horse and a lion doing the reverse cowgirl in a moonlit clearing proved too much.