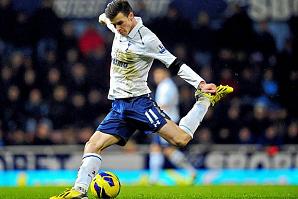 Probably not worth a full pack of Quavers

It has emerged that the unnamed bidders hoping to rival Real Madrid for Gareth Bale’s signature were Nice ‘n’ Spicy Nik Naks Southern League Division Two club, Harold Thursday, who made an offer of £6.38 plus half a pack of Quavers.

The identity of the second club who have made a bid for Bale has not been officially announced by Tottenham but Manchester United have been linked with the player this summer. Speculation that the bid is from United would appear to be wide of the mark, however, with Harold Thursday confirming that it was their bid that Spurs are considering.

“We’ve had a look at Gareth on Match of the day over the last season and we reckon he’d improve our side.” said manager Howard Burnsley, “Especially given that our current left winger is 44. Stone.”

Thursday had ruled themselves out of the bidding for Bale as recently as a couple of months ago but recent activity in the transfer market appears to have lead to a change of heart.

“When players started moving clubs for fifty or sixty million we knew we couldn’t compete with the over-inflated prices that are out there.” continued Burnsley, “So as much as we would have liked to be in the running for Bale from the beginning we can’t afford £86m like Real Madrid.”

“But then Manchester United made an insultingly low offer for Fellaini and Baines from Everton, and Arsenal made a bid for Cabaye that was just ridiculous. Suddenly we thought, hello, we can compete if this is the sort of thing going on. So we got straight on to Spurs and emailed through an offer.”

“None of this ‘structured deal’ nonsense either, they’d get the whole six and a bit quid up front as well as the Quavers. Better that way really or they’d go soft. We haven’t heard back from them yet, which means they haven’t rejected it.”

Madrid remain the firm favourites to sign the Welsh international, but until the deal is done Harold Thursday retain hope and are said to be open to negotiation, maybe even able to increase their offer as high as £7.50 and an out of date can of Fanta.

Comments Off on Mystery second Bale bid was from Harold Thursday