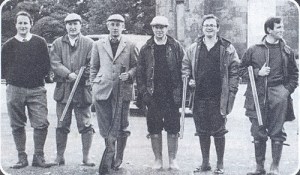 A better year: Dave and friends off to bag themselves a pauper or two.

From a cottage in Cornwall as he enjoys his fourth holiday of the summer, David Cameron has spoken of his regret that his ‘phenomenally bad back’ ruined his third holiday on the Island of Jura as it prevented him from taking part in one of his favourite sports – hunting the poor.

The Prime Minister has previously called poor hunting one of the most defensible field sports and is known to have been an enthusiast since his Eton days when he was a member of the Eton College Stalkers and regularly strode out with the school’s hounds in the pursuit of anyone whose standard of living left them marginalised and socially excluded.

Defenders of poor hunting claim that it is in fact an extremely physical and skilled sport which demands great concentration and stamina as once a poor is released to run terrified through designated woodland its pursuers have to employ stealth and wariness often crawling through dense undergrowth for hours as they and their dogs track the sent of trans fats and National Lottery scratch cards.

Cameron is by no means the only head of a government to enjoy human vs. human blood sports, Vladimir Putin has been photographed many times jogging bare-chested across the Siberian tundra clutching a gun engaged in a pastime whose name roughly translates as homo-seek while Barack Obama occasionally manages to take time out from the Oval Office and play a round or two of welfare whuppin’ which lacks the skill of the other forms of hunting but is growing in popularity due to its speed and sanctioned use of mortar fire.

A Downing Street spokesperson this morning acknowledged that some may find Cameron’s pro-hunting the poor stance distasteful but urged people not to lose focus from the real issue of the day saying:

“While Fat Dave’s down the bottom end stuffing himself with clotted cream Cleggy No Mates is running the country. May God help us all.”