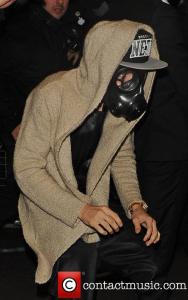 The Biebs out and about of an evening. Seriously.

Unsettling Canadian pop-chipmunk Justin Bieber has topped off a controversial week by defecating on fans gathered under his hotel balcony.

Over the last few days the nineteen year old sign that the apocalypse has begun has spat on fans, allegedly attacked a DJ and been caught urinating in a mop bucket he found in a restaurant corridor. Now this latest exhibition of grim anti-social behaviour has increased speculation that The Biebs as millions of fans across the globe call him is going what’s known in the music industry as ‘a bit Michael’ and believing himself to be above the law and social convention.

While fans were horrified by this latest stunt the press who were also gathered nearby were intensely relieved.

“When he appeared on the balcony I was afraid he was going to start singing” said one photographer. “Happily he conveyed his message from an entirely different orifice. I think it’s his best work to date.”

In a further indication that Bieber is perhaps unwisely trying to ‘be like Mike’ he has got himself a faithful primate chum though whereas Michael Jackson had a chimpanzee called Bubbles, Bieber has a smaller sized pal in Mally a capuchin monkey.

“I want everyone to keep believing in me. I’m only young and I’m just praising God and being the best I can be everyday. People want to tear me down and underestimate me but I’m a lot smarter than they think,” said the monkey while his owner remained unavailable for comment.

Comments Off on Disgust as Justin Bieber defecates on fans