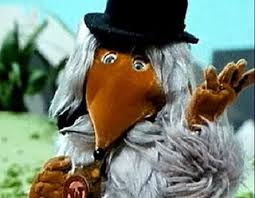 Now the tennis is over the Wombles are struggling to give the All England Club a post-tournament clean due to cutbacks.

“The government said we had to become a profit-making service,” said spokeswomble Tobermory. “Wombles work as a team, Wombles are tidy and Wombles are clean but since we were forced to stop volunteering and make coin we’ve been shafted right up the Harry Hamster.”

Since the late sixties Wombles have been cleaning the Wimbledon area and making good use of the things that they find but as WomKleen they’ve been swamped by health and safety legislation and seen their budget drastically cut.

“We womble by night and we womble by day looking for litter to trundle away,” said Tobermory. “Now trundling’s banned until we all go on a course to learn how to do it ‘properly’ plus apparently our hours break the working time directive.”

“Underground, overground Wombles aren’t free so we’re thinking of jacking it all in and moving to Finland. Plenty to clean up there. Them Moomins are filthy.”

Comments Off on Wombles despair as cutbacks threaten Wimbledon clean up