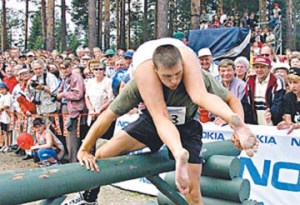 Cheered on by an enthusiastic crowd in Basingstoke

A young couple from the village of Harold have spoken of their excitement at being chosen to represent England in the World Cross-Country Oral Sex Championships, held yearly in Finland.

In this ancient and traditional sport, a married couple must race over harsh mountain terrain, overcoming challenging obstacles and all the while indulging in mutual oral pleasure. The gruelling challenge proves too much for most competitors, and only the couples with greatest stamina, upper-body strength and head for heights stand a chance.

“We’ve been working so hard for this,” chirped bubbly Fiona Darling, 23. “My husband’s been up before dawn every morning for months, it’s been a real grind, but we’re ready. We won the UK championships in a close finish in Basingstoke back in April, and it’s amazing to find out we have a chance to bring it off again in Finland.”

The Darlings triumphed on a tricky Basingstoke course with a personal best of 3 hours 14 mins and four orgasms apiece, and Mrs Darling believes this impressed the selection committee.

“A lot of people get confused by the language,” he explained. “Lots of people have heard of the ‘Wife-Carrying’ championship, but very few people realise that Finnish has the same word for ‘carrying’ and ‘tonguing’. I’ve lost count of how many times I’ve had to explain it to my parents.”

Mr Darling spoke of the daunting opposition the couple were likely to face: “Some of the other countries are much more adapted to the conditions we’re likely to face out in the bush. The French are always right up there, and the Russians have got a man who can climb a 12-foot wall of logs while simultaneously bringing his wife to a thundering multiple climax,” he explained. “We’ve got a way to go before we get there.” 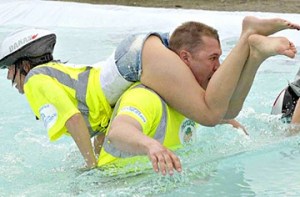 Filed under Around Harold, Dating, Sport