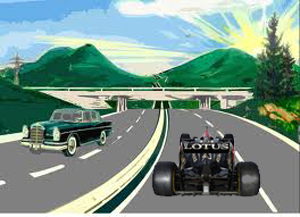 Staying awake will be just one of the challenges

Following a disasterous number of blow-outs during this weekend’s British Grand Prix, engineers at Pirelli are urging the FIA to avoid tight corners until they can work out how to make tyres.

“From reviewing the footage of Hamilton’s tyre failure, we were able to ascertain that he was driving quite fast”, explained Pirelli’s marketing chief Lorenzo Capellini. “And to be honest, anyone trying to go round a corner like that is definitely asking for trouble.”

With speed and cornering both identified as culprits, Pirelli think they’re close to finding a solution. Computer simulations have shown that either a very slow race or one in a fairly straight line would be reasonably safe, as long as they change tyres every three or four miles.

“Fortunately, the next race is in Germany”, enthused Capellini, “they have some lovely untwisting autobahns for the drivers to tackle. And the service stations are quite close together, so given enough pit crews, they might make it to Berlin.”

The F1 drivers have cautiously welcomed the plan, but expressed concerns that the roads would remain open to the public. “We know it’s short notice, but you’d think the German police would be able to find a few cones”, complained Jenson Button. “I’m not too sure how the sponsors will take it if I’m beaten by an elderly couple driving a Toyota Prius.”

Jean Todt has called an emergency meeting to discuss where to fit spare bulbs, hi-viz jackets and one of those little foldy-up warning triangles in each of the cars, insisting that ‘safety comes first’. “If they keep below 90 it should be reasonably safe, although Massa did crash during practice on a deceptively unbending section. But frankly, I’d have been surprised if he hadn’t.”

Vettel may have the home advantage: his local knowledge means he won’t need a satnav. But Ladbrokes say the favourite to win is a Mercedes Sprinter van, running on remoulds and driven by skinheads. 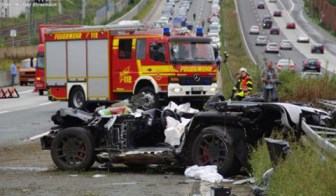