Local council to use potholes to ease graveyard overcrowding 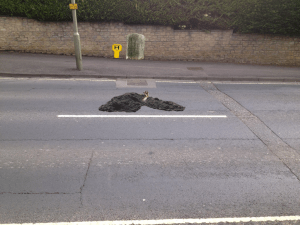 With the number of available graveyard plots critically low, and the amount of potholes raising, a local council in the village of Harold have decided to cure the two problems with one easy solution. Any body looking to have a funeral at a reduced rate can choose to be buried in a pothole.

“This idea solves so many problems” Councillor Ronsson told us, “Graveyard don’t fill up, potholes get filled in, and the remaining family aren’t left having to find the money for a proper funeral.

“This option is the last resort, but we have had no choice. We have been saying about cuts to the roads budget and the fact we are running out of places to bury people for years, but people insisted on continuing to die. It is a case of the selfish few ruining it for the rest of us.”

Despite the obvious benefits not everyone is keen on the idea. Janet Holmes, head of the Harold cycling association said “avoiding potholes has always been a danger for us Lycra lovers. We are not totally against burying people in public places, but at least do it on the path. That way, if the occasional pair of knees pop out, we have extra places to park our bikes”

Describing how the plans will work, Mr Ronsson has tried to calm fears that some critics have. “We won’t be throwing any old stiff into the roads, mainly just the ones that have limited funds. But if the idea spreads, who is to say that fans of over-priced shopping can’t one day be used to repair the road outside Harrods.

“The beauty of this plan is that we will never run out of pothole plots.” the councillor continued. “When all the potholes are filled we can look to implement our long awaiting programme of speed reduction speed humps on every street.”