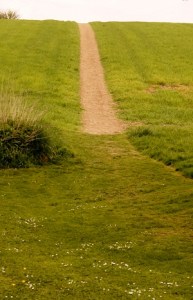 In a desperate attempt to boost local tourism, the village of Harold has decided to institute a Rock ’n’ Roll Trail by renaming several local features after classic music tracks.

The idea after a planning committee met to consider a name for a path which leads out of the village with no apparent destination. “It’s very old,” said committee chairman, Eileen Remnant, 76, “but no one has a clue where it used to go to. It just fizzles out at the top of a slope.”

“When I joked that it was a road to nowhere, Councillor Cummerbund pointed out that this was title of a hit by a pop group apparently called The Talking Heads. Then the idea of naming other village places after popular songs and groups grew.”

The village is now planning a Rock ’n’ Roll Trail week and has invited villagers to come up with new names of local landmarks for the festivities.

“We’ve had some great ideas already, the Squirrellickers Arms has named its guest room ‘Hotel California’; the Over-The-Hill Nursing Home will display a sign saying ‘Welcome to the House of Fun’, and Stephen Trawlerman the owner of the The Stephen Fryer chippie swears he will be Elvis for the week.”

Prospective visitors travelling to Harold from London need to look for ‘Country Roads Take me Home’ and their return journey will be on the ‘Highway to Hell’.

Comments Off on Talking Heads’ ‘Road to Nowhere’ found in village