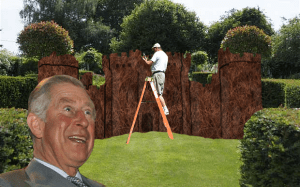 The only bush to be shaped with wax strips

There were blushes at the annual Harold Flower Show yesterday, when it was realised that the winning entry for the bush topiary section had been created from the pubic hair of the successful gardener’s wife.

Jane Fondant, leader of the local Women’s Institute and sponsor of the prize, admitted that the entry was within competition rules. “There was nothing to say that the entry had to be fashioned from the green foliage of a bush; but naturally we were thinking of a shrub rather than Mrs Kennedy’s nether regions. Things have changed a lot in the WI since Calendar Girls, and we are keen to embrace, as it were, anything that distances us from the old jam and Jerusalem image.”

Winning gardener Eric Kennedy, 65, was delighted with his prize. “I’ve tried to win this for several years, but have always been defeated by pests or poor growth damaging my box bushes,” he said in a broad Haroldian accent. “Then one evening, as we were getting ready for bed, I suddenly looked across at my Fanny and the rest is, well, history.”

Fanny Kennedy was modest about her part in her husband’s triumph. “All the credit goes to Eric,’ she said. ‘After all, he was the one who came up with the idea and it was his skill with the shears that created a model of Harold Castle in my thatch.”

Mrs Kennedy admitted that the prize giving ceremony was a little nerve racking. “It’s not every day you get to meet the Prince of Wales and when it does finally happen, you don’t expect to be starkers from the waist down. But Prince Charles is a wonderful person and put me at ease straight away by chatting about his plans for Camilla’s front garden.”

After shaking hands with Mr Kennedy, Prince Charles attached the winner’s rosette to the topiary’s battlements and kissed Fanny on both cheeks.

[Ed: Tickled by this story? Then try http://eveningharold.com/2013/04/06/pippa-middleton-humanely-destroyed-after-fall-at-grand-national/ ]

Filed under Around Harold, Lifestyle, Royals