Third councillor ‘would back exit from Bedfordshire’ 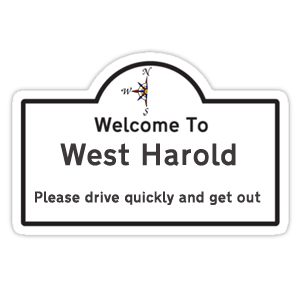 Signs will be printed very locally

With exiting organisations currently all the rage, a third Harold councillor has declared they would ‘happily walk away from Bedfordshire tomorrow’.

Harold has already declared independence from Europe, NATO and Groupon, but the latest move could see the village become ‘more insular than many dared dream’.

“There are some good things about being in Bedfordshire”, Ron Ronsson admitted. “It’s a relatively small county, and not many people visit. But given an in/out referendum, I’d have to say ‘out’. It doesn’t do to dwell too long on the positives.”

Harold could see itself become the first un-countied village in the local undefined area, if hardliners manage to get their own way. And with the council voting to order 8 miles of  steel fencing and razor wire from Jewsons, the outcome of the vote looks like being a foregone conclusion.

For some, the move doesn’t go far enough.

“I can only speak for myself, but severing our economic links with Bedfordshire could save us a fortune”, said Ronsson. “Especially as the village doesn’t have a Marks and Spencers, John Lewis or a lap dancing club. But if you ask me, we need to distance ourselves from everywhere west of the high street. In particular the council estate, and their flats full of dole scum.”

Ronsson insisted such a move wasn’t just ‘reactionary toss’, and pooh-poohed questions about where he’d find an even more local nanny, window cleaner or gardener.

“Can you build a great village without rolling your sleeves up and getting your hands dirty?”, roared Ronsson. “Well you can if you’ve got plenty of kids. If we’ve learned anything from China, is the value of child labour. In fact I’m already in discussions for us to surrender to Beijing.”

Comments Off on Third councillor ‘would back exit from Bedfordshire’