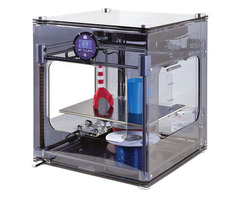 Why else would you buy one of these?

A day after the world’s first gun made with 3D-printer technology was successfully fired in the Untied States one of Harold’s younger residents announced that he had become the first person to use a 3D-printer to create an artificial vagina.

‘When I got the printer I thought about what I really wanted,’ said seventeen year old Simon Delaney. ‘Guns are cool and that I suppose but I’d rather shag something than use it to fire at some cans. When I asked all my mates they said the same.’

3D-printing works by building up layers of materials to build solid objects and Delaney admits that working out what material to use did cause him some problems.

‘The printer’s default material is really hard which was no good. I needed something a bit more user-friendly if you get my meaning. Then I found out that doctors are using soft plastics to build new body bits for people so I managed to find something fleshy and warm.’

‘It’s new technology and I think that scares some people but I’ve succeeded in creating something that a lot of them want and that can be used accurately and repeatedly.’

Delaney says that he intends to go into business but there is one major stumbling block.

‘Mum and Dad say I’ve got to finish my A levels and go to uni and that I can’t become a sextrepreneur which is really unfair and probably child abuse. I want to go on The Apprentice. I reckon his Lordship would like my invention and I’d do a back-passage one in case he’s into that. With a 3D-printer I can cover every angle.’

The would-be enterprising teen was quick to deny that he was trying to compensate for a lack of human-to-human sexual contact especially given that he uses a wheelchair.

‘Are you kidding me? That is well prejudiced,’ he said. ‘There’s nothing wrong with Little Simon, who’s not little, no way. And anyway that Katherine  Hallet’s a right slag and lets me finger her in exchange for a go on my iPhone 5.’

Like Vaginas? Then pop over to Ask Brenda for more.

Filed under Around Harold, News, science