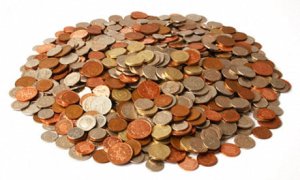 You want coins? You can’t handle the coins.

There was sadness and confusion in Harold as it became one of the first villages to trial the government’s new scheme of loading benefits onto a pre-paid card rather than paying them into bank or post office accounts. The cards are engineered to prohibit the buying of many items from alcohol to pet food to anything over a certain value.

“It’s horrible,” said Mark Keen, a full-time support worker at Piebald House. “The card makes me second-class. I work and pay taxes now there’s this Big Brothered thing that wont let me buy stuff. It’s humiliating plus The Squirrel Lickers is unbearable now. Can’t buy a pint and people with cash get to control the jukebox. Last time I was in Dominic Delaney kept putting James Blunt’s You’re Beautiful on and no one had a coin to break the flow.”

The spending restrictions were applauded by local MP Spencer Chadwick. “This cuts down on Nedd items – the non-essential, desirable or damaging. Scroungers will be prevented from taking out Sky subscriptions and sitting at home all day smoking. Well, they can still have homes but they’ve got to be smaller and smoking’s definitely out.”

When asked by the Evening Harold why it was unacceptable for someone on a low-income to enjoy a takeaway or buy their children a toy but acceptable for him to have his second home, including it’s extensive wine cellar, refurbished at tax-payers expense he said “Sorry, you’re breaking up. We’re going through a tunnel,” despite having been contacted via his parliamentary office’s landline.

“It’s not the shopping that I mind so much,” said pensioner Doris Kettle. “But I like to have a bit of cash for other things like church collection and my eldest grandson. He’s at university doing something with computers and I used to save up all my twenty pence coins for him so he could use them when he went to the launderette. I’d do them up in a little envelope and write a message and it was nice to think that when he was drying his clothes he was sparing a thought for his old nan. It’s things like that that I miss.”

Rachel Lyddon, a spokesperson for TDEC the French-owned company running the card scheme was quick to deny that it had any impact on people’s well being.

“All this talk of increased sense of isolation and depression is nonsense,” she said. “The heavy restrictions are empowering. We’re setting people on benefits the challenge of thinking more creatively and being innovative with what they are allowed to buy. It’s fun more than anything else.”

She also said that the pre-paid card was just the start of a series of sweeping changes to the benefits system.

“As we’ve seen in Harold the cards can cause serious queues to build up in shops which is why from next month all shops will be segregated with those using the pre-paid card kept away from other people. We will also be looking at restricting the times the cards can be used as well as banning their use outright in areas of high affluence.”

She went on to explain that in order to smoothly enforce this segregation people on benefits will be required to wear an item of distinction on their clothing so they are always  identifiable.  However she stressed that at the moment that item was in the concept stage and no one had any idea what it could possibly be.

Comments Off on Sadness as villagers receive benefits on prepaid cards