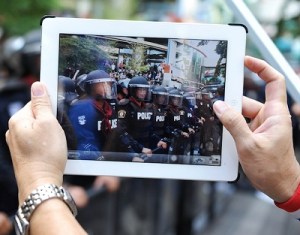 “And I would have gotten away with it too, if it weren’t for you meddling kids with your video camera”

A video camera has snuck up behind a US police officer and filmed him while he was minding his own business pumping eight bullets into a fleeing black man.

The incident has caused shock among racist US officers, with some vowing they will give up shooting unarmed black men in protest.

“You just don’t feel safe anymore” said Officer X. “You turn around for just a few seconds to shoot a suspected black man only for some scumbag video camera to shoot you in the back.”
END_OF_DOCUMENT_TOKEN_TO_BE_REPLACED

Comments Off on Video camera shoots armed US police officer