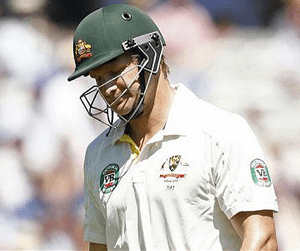 A newsagents in Harold has reported a 200-fold increase in orders for antipodean newspapers with miserable-looking sports failures on the front.

Before Thursday, Derek Evans rarely sold a copy of the Sydney Sports Echo, and Oz Cricket Monthly had been banned by the council. But following England’s success in cricket, bicycles and Wimbledon, owning such a periodical is now virtually compulsory.

“This is a good one”, said Evans, holding up a copy of the Wollagaloo Sporting Gazette. “You can see some phlegm on Watson’s face, where Clarke has been shouting ‘you have my full support’ at it.”
END_OF_DOCUMENT_TOKEN_TO_BE_REPLACED