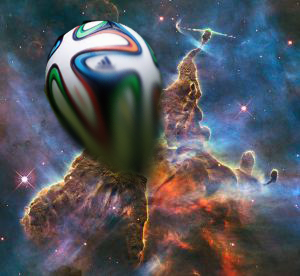 A massive super-fissure in the fabric of the universe was most likely caused by Brazil’s unprecedented thrashing by Germany, claim scientists at Jodrell Bank.

“The devastating effect of Brazil’s defeat should not be understated,” said Professor Brian Cox. “It almost destroyed the universe.”

The giant crack was first observed Tuesday evening and opened up wide enough to give astrophysicists an unparalleled view of a parallel universe.

“We sat awhile watching an alternative reality fixture between Brazil and Germany,” continued Cox. “The first 80 minutes were much the same as in our own universe, with Germany holding a 7-goal lead over the opposition. But matters took a different turn when the managers made their substitutions.”