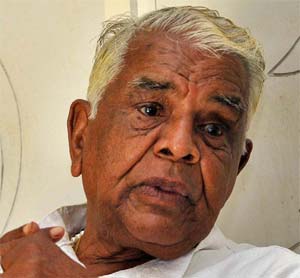 Babulal Gaur: we couldn’t decide whether to call him a prat or a dingus so we’ve settled on pringus

Babulal Gaur, minister for law and order in Madhya Pradesh, has clarified his comments that rape is a “social crime’ that is “sometimes right and sometimes wrong”.

“It wasn’t the world wide condemnation or the sudden realisation that I was talking out of my bottom that has made me speak to the media,” Gaur told a hastily arranged press conference, “but the horrifying thought that tourists might not want to come to India due to a fear of violence. Or perhaps that an elected official can spout views on women that even Bluebeard might think were misogynistic and not be forced to resign might put more thoughtful tourists off visiting.”

“Let me assure Westerners that while I do think rape is sometimes right and sometimes wrong in the case of anyone laying a finger on any of you and your lovely, lovely money it is always wrong,” Gaur stated emphatically. “You’ll be safe in India, our own wives and daughters not so much, but hey, hardly any of them can match your spending power.”

“So come to India, who needs equality when you’ve got lots of photogenic elephants?”