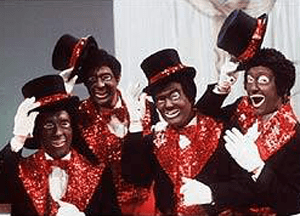 Their sacrifice paved the way for a white woman to be promoted to the top of a black organisation.

Indefensible racists the Black and White Minstrels have been praised for their brave promotion of trans-racial awareness.

Once a subject that was as much non-existent as it was controversial, trans-racial issues were given a voice by white men who blacked up and sang songs that made light of slavery.

The group of pioneers were the first to reject the burden placed on them by a thousand years of privileged chance genetics, and model themselves instead on Uncle Ben’s rice packets.
END_OF_DOCUMENT_TOKEN_TO_BE_REPLACED