Actor Liam Neeson has been plunged into controversy after failing to notice a perfectly square black bit of dirt on his living room window and happening to wave at just the right angle to give the unfortunate impression that he was imitating Hitler.

Immediately accused of racism by several witnesses, Neeson was today frantically giving interviews and trying to explain that it was a complete misunderstanding, and that he is definitely NOT A RACIST.

“I feel terrible, it was a complete accident, and now everyone thinks I’m a racist,” he explained to reporters. “It could have happened to anyone. My housekeeper is a lovely woman but a little careless, and I had no idea that patch of dirt was right there.”

“And now everyone thinks I’m a racist. I’M NOT A RACIST.”

“It’s just bad luck. I mean, it’s not like I said I hate black people or something, is it? Only a racist would say a thing like that. Which I’m not.”

Trident to be replaced by Father Ted statue 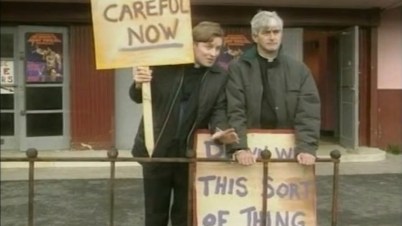 “Better than a thousand hollow words, are two signs that bring peace” Buddha (sort of)

Defence Secretary Michael Fallon has announced that the plan to replace Trident with £100 billion of alarming death-tech has been scrapped in favour of some statues of Father Ted and Father Dougal holding signs saying “Careful now” and “Down with this sort of thing”.

“These are perfect sentiments for modern Britain,” Mr Fallon told us. “They not only represent a certain quiet firmness and unflappable calm that is British to the core, but the fact they’re Irish and we’re stealing them to use for our own purpose is a very real reflection of how we used to behave towards the entire world in times past, which’ll hopefully deter any potential invaders.” END_OF_DOCUMENT_TOKEN_TO_BE_REPLACED

Comments Off on Trident to be replaced by Father Ted statue