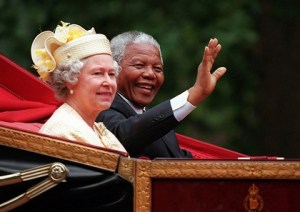 Nelson Mandela, the 94 year old Greek-born Duke of South Africa, is once again in hospital with a serious lung infection. South Africans are holding their breath, worried that the pivotal figure in their nation’s history may not be around too much longer.

Mandela, the ex-consort of mother of the nation Winnie Mandela, has always loyally supported his wives and diligently carried out both official and charity engagements. But he has really endeared himself to the public by showing his human side with frequent gaffes, and by being a little bit racist.
END_OF_DOCUMENT_TOKEN_TO_BE_REPLACED

Comments Off on Duke of South Africa seriously ill in hospital