Step-ladder ‘never really felt like one of the family’ 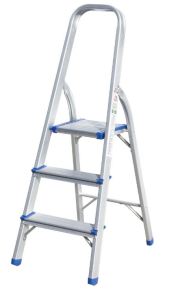 A loom n yum, as the say in the States.

When ‘A’ was rescued from a B&Q orphanage, he thought a loving family was taking him into their home and their hearts.

“The kids seemed very excited on the way home in the 4×4,” recalled A, “singing ‘Daddy got a ladder’ to the tune of ‘If I had a hammer’. I thought I would soon be enjoying a bowl of homemade soup in a warm kitchen and then the kids would show me where I was sleeping. I couldn’t have been more wrong.”

To his horror, the jeep pulled up the gravel path to the detached double garage. While the children ran into the house to tell mummy about their outing with daddy, A was slid out of the tailgate, had his packaging stripped from him and was roughly shaken before being hung on a pair of hooks inside the garage.

“Yeah, reckon you’ll do,” said the man before switching off the light and shutting the garage door.

In the darkness, a large spider crawled and A heard the familiar creak of aluminium on aluminium.

“I’m Triple Extension,” said a deep voice in reply, “and this is my wife, Roof. Get to sleep, Steps. There’s work to be done, first thing in the morning.”

Over the ensuing months, A got knocked about a bit, rattled a lot, and had a whole tin of magnolia emulsion tipped over him.  At Christmas, his spirits were lifted with all the excitement of putting up the decorations, only to be dashed again when he was locked in a cupboard with all the other skeletons.

“It was a tough childhood,” said A, “but you harden to these things, especially if it’s blobs of plaster and cement they’re dropping on you.”

After a few years, A was getting a bit wobbly and, with the advent of LED light-bulbs, he eventually became redundant, was taken to the recycling depot and dumped in a skip full of scrap metal.

Following a long and complex process of decontamination and reincarnation, he became the foil container for the Chinese takeaway you ate on your way home from the pub last night, which you dumped in your landfill bin as you staggered up your front steps.

So that’s the end of that.