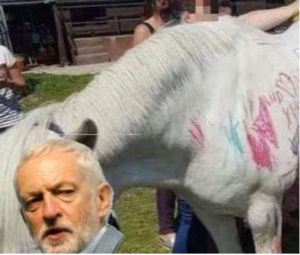 The growing trend for Jeremy Corbyn being hired out so children can paint on him during birthday parties has come to Harold. Local parents Cassian and India Hagan-Beckett have come under heavy criticism for holding a Corbyn Daubin’ Crew themed bash for their seven year old son, Quail.

“People have said this teaches children to regard politicians as entertainment and takes away their dignity,” India told us. “But the paint is non-toxic and Jeremy seemed very happy to just stand still not effectively opposing anything.”

Corbyn later said that while he was present at the painting party he didn’t think he was involved. “As an independent observer,” he said. “I may have been accidentally splashed with this image of a machine gun-wielding Israeli soldier being taunted with a feather by a small boy from the West Bank but really I was barely present.”

While the controversial Corbyn parties grow in popularity it is thought that the market for ones involving pinning the tail on David Cameron has died on its arse.

Comments Off on Villagers slammed for holding Corbyn painting party